My summer research at the Human Media Lab involves large investigations into multitouch sensing. For large interfaces, this involves the user touching the surface under some sort of illumination while a video camera captures the entire surface, and then filtering is applied to determine the touch points of the finger. There are often issues with large amounts of noise. The particular technique I’m working with is Frustrated Total Internal Reflection, but there are many other ways to do it; Microsoft uses Diffused Illumination as well. For these surfaces, it is also convenient if you can tell the difference between a human body part touching the sensor, or if someone put a mug down on top of it.

Someone brought a Plasma Ball in last week, and it looks like it makes a great multi-touch sensor too: If you’ve ever played with a Plasma Ball, you’ll know that the strings of energy (I have absolutely no idea what the proper name is) dissipate out from the central sphere evenly, until one touches the edge of the outer glass sphere with a finger or other body part. Then, the point of contact glows bright pink and a much brighter strand attaches that point and the central sphere. This effect only works with objects that are properly grounded, such as a human body, which is even better.

Finally, I was playing with our acrylic surface, and noticed another technique that could work even better, and would also only work body parts: blood! Look at the pair of images below: 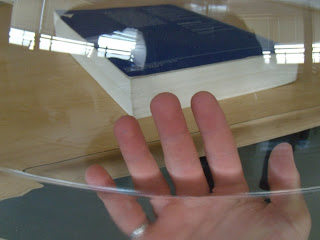 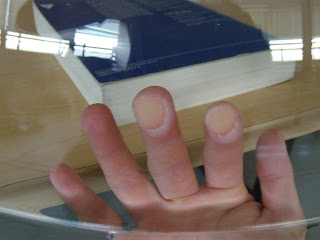 The point of contact between my fingers and the plexiglass goes from healthy red to pale white as the pressure makes the blood gush away! With colour filtering, this effect would actually be incredibly easy to pick up, given ideal skin and light conditions. I was not even applying that much pressure. The rings of frosting around my fingers in the second picture are from condensation.

This entry was posted in research. Bookmark the permalink.