How can computers use tacit knowledge?

I’m seven weeks into my Master’s, and the clouds are beginning to clear around my research topic. But first, an aside… 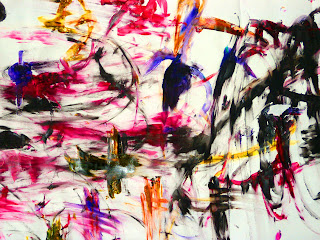 In my improv class at Impatient Theatre on Saturday, there was a scene that was described as “incredibly complex”. We were playing with the idea of an “analogous scene” that explores and expands the themes of a previous scene in a different situation, with different characters.

The first scene was an old couple going through storage in their basement. As the scene progressed, there was subtle tension between the two, with the woman wanting to bring something up, and the man ignoring her, and instead bringing attention to some old toys. He passed one to her (a plastic Pony) and held one himself (a He-Man). He held the He-Man in front of his face and said “Hey there little Pony!” and so on. They weren’t interacting as a couple anymore, but as two little toys. Finally, the Pony said that she wasn’t sure if it was working out between her and He-Man, and that maybe they should re-evaluate their relationship. Both the woman and the man froze, the conversation between the toys having become about their relationship. The scene ended.

The first scene took about 2 minutes, the second one took 4 minutes. We analyzed both of them for about 5 minutes apiece, and I still find myself thinking about them. When the improvisors were asked why they made certain choices, they couldn’t actually verbalize their thinking or reasoning, yet all of them made amazing scenes. It turned out that the improvisors in the second scene had two very different in-the-moment interpretations of one part of the scene, yet they together made something that was interesting to watch from the audience.

In my continuing research about learning by mimicry, I’ve become interested in the idea of tacit knowledge, knowledge that is defined by its difficulty of communication. Tacit knowledge is usually passed by a learner observing someone else, whether they are explicitly a teacher or not. I assert that interactions that require or use tacit knowledge are more powerful and expressive than those that are not. While my initial motivation to explore this space was miming, a form of physical expression frequently used by people when words are not enough, tacit knowledge exists in the use of any sufficiently complex interaction. I use the metaphor of drafting while riding a bicycle as the way that a user can explore the space of existing tacit knowledge:

1. Advance tentatively
2. Have the space of previous interactions shown in a useful representation
3. Made a choice
4. GoTo 1

A small philosophical problem I have with this is that it seems to suggest that all possible interactions are pre-determined. Well, on a regular basis, the vast majority of interactions are pre-determined. New space can be explored by a different mechanism, but frequently it is built on existing knowledge from different areas that is synthesized, filling in convexities.

I want to focus this down to how tacit knowledge about physical interactions is communicated and processed by users. In particular, I want to focus on newer gestural interfaces, which are currently baffling to people that haven’t seen them (I played with one, and it was trial and error). If communicating gestural information is possible, it also means we can move beyond the “list of (x,y) finger points” as the only possible interaction, which is embarassingly limiting given the possibilities afforded.

In the improv scene I wrote about above, the improvisors in the second beat didn’t know explicitly what pattern they were following, but they did know it, and they could expand on it. This is a power that is hard to express in existing interfaces. If computers can be made to express tacit knowledge, then I believe we’ve taken another step to the final goal: making computers worth caring about.

Image above is a hand painting that was made each night for a play I was in this summer, “For a Better World” or “Für eine bessere Welt”, for Single Thread Theatre Company. One theme of the play, as I saw it, was the evolution of culture.

This entry was posted in moments, research. Bookmark the permalink.