One of the problem with video games that have a story component is that the player you represent can behave inconsistently with the “story of the game”. Games that do not have a story component, such as most Will Wright-style games, are the exception. An example of this problem is the very detailed story and character development of Grand Theft Auto IV, and yet the cartoonish violence which is actually fun and deviates from the character that the story has built for you. Also, in some levels of the Thief Series, it is sometimes just easier to sprint through an entire level instead of being stealthy, and thus having the entire complement of guard and monster AIs making a racket trying to find you.

Elsewhere, video games have adapted strange conventions to prevent this problem, such as the “silent protagonist” seen in many first-person shooters that avoids the sticky issue by simply shutting up.

One potential cool way to synthesize story and gameplay is to somehow reward or punish the player for acting more or less like their part. I hadn’t yet seen this in a game yet, until I was reading the Wikipedia entry for Valve’s upcoming game, Left 4 Dead. The Tank, concept art seen below, is one of the playable zombie characters in the game. 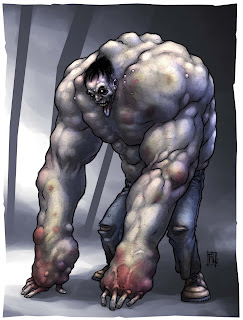 Obviously, this character is not meant to just sit still and remain pretty. Strategic thinking also doesn’t seem to be suggested by its form. To quote the article:
“Also, the tank has a “Frustration Meter” which means that control will be taken away from a human player if the Tank does not engage the survivors for a certain time.”
Cool! There are other varieties of playable infected that have different characteristics, and they don’t have this same description. So, the game designers are suggesting a certain “play character” in their design. I can’t wait to see what more comes of this.

Suggestion: make the physical appearance and gameplay characteristics change automatically based on the game learning a player’s “style”.

Note: The most famous silent protagonist is Gordon Freeman, the main character of Valve’s Half-Life series. Valve is great.

One response to “Playing your part”