Posted on November 29, 2005 by dustinfreeman

So, I went crazy and had to leave Kingston, so I decided to get together with friends from high school and have a quasi-reunion in Toronto. Where did we go to high school? Kingston. Whatever. First, allow me to introduce to players: 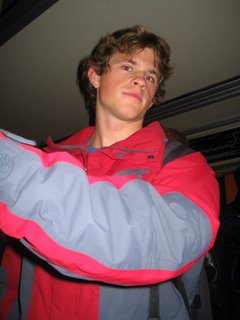 Cheryl, a film student at Humber and friend from high school improv 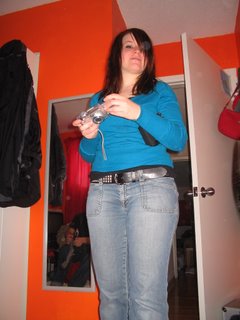 Kate (left) from high school improv too, now in the Improv Show with me. Caitlin (right), exclusively dates men who are profiled in magazines. 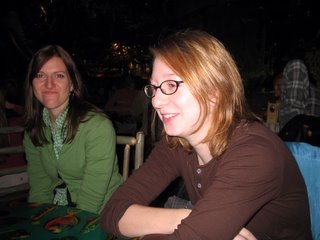 Dave (left) my token black friend and hetero life-mate. He’s at Geulph now and studies Biological Chemistry or something, also did high school improv with me. Sandy (right) is another friend from LCVI, goes to Mac, not sure what she studies. 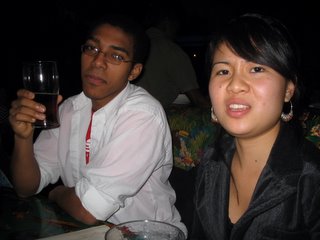 So that’s who went. We all met in downtown Toronto Friday night, and headed to Cheryl’s house. 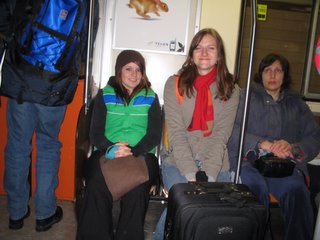 This is the girls on the subway. You might not recognize Sandy there on the right – she hasn’t applied make-up yet. I am not in the picture.

Man, isn’t it cool how all these pictures are tagged with the time? I can like, relive the night down to the minute.

Anyway, after dropping excessive luggage off at Cheryl’s, we started to get tired from lack of alcohol… 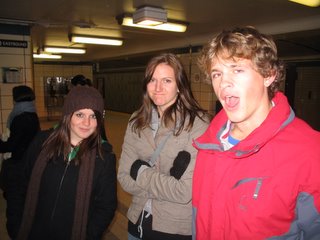 …so we decided to head to the nearest bar and get drunk. I, for the first time ever, ordered an entire pitcher of Guinness with Dave. I’ve never seen that before. Needless to say, it dissapeared quickly. We also discovered that Kate’s hair moves over to the front of her face when her body decides its time for her to stop drinking: 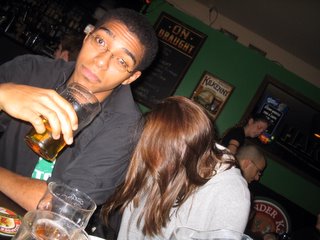 Later, we saw a poster for some kid that was addicted to heroin. 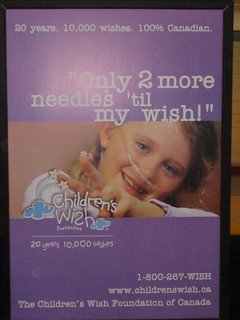 So we got home, and fell asleep drunk. Thank fucking god Cheryl knows (somewhat) her way around the transit system.

So next morning, based on the fact that estrogen out-numbered testosterone on this trip, we went to the mall. Also, it snowed, which we had never seen before in our lives. 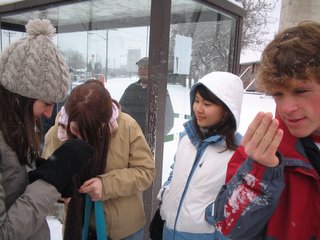 Dave and I wandered aimlessly while the girls “shopped” or whatever, and we had lunch at the rainforest cafe. Our bill is below. 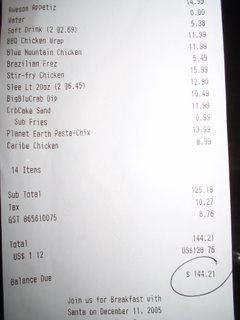 Then, I put on some women’s clothing and did some model shots. 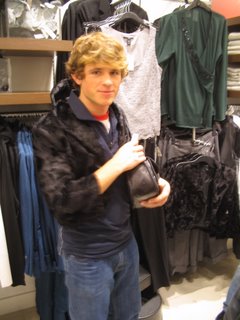 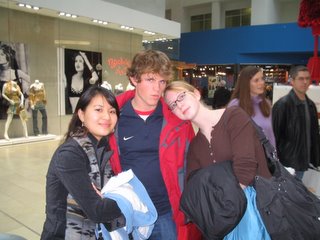 While walking back to the bus at some point my bus token fell into something I can only describe as a mixture of dog feces and gum that was caked onto the already-dirty tile with a mixture of hot, cold and big-city indifference. I am probably seriously infected with something. Ignoring that, here is me and Kate on the bus. I am taller because I am sitting on some sort of child seat. 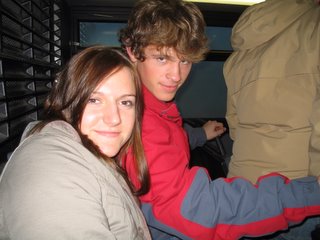 We then to Bad Dog Theatre to see some long form improv, which was sweet. The poster for it is the leftmost one in the picture below. I don’t know why we aren’t doing this at the improv show yet, its amazing. 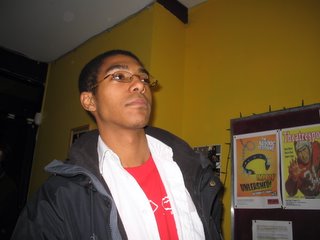 So then, we got the urge, again to get outrageously drunk. We proceeded to do so at Green Room, this really hard to find bar in Toronto. I think this is because it is meant for actual Torontonians that want to avoid people like us, which is of course why we went there. 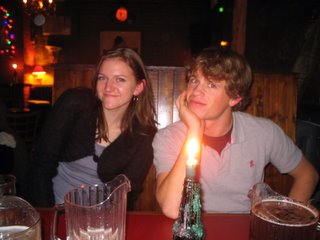 Amazingly, it was pretty sweet, and I think I shall refer to
it as my Toronto Hangout from now on. Dave is trying to impersonate Jesus in this picture, but fucked up. 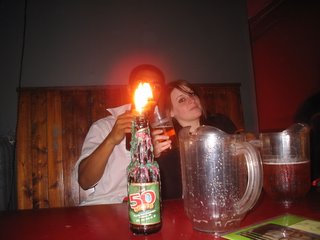 Some of Cheryl’s filming friends were there is well. I can’t remember the name of the guy in the middle, I just know he drives race cars in India, his dad works for Bollywood, and once he punched Greg Luce in the face. Oh man. 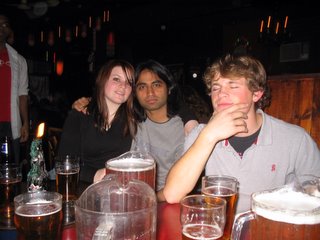 So we got really drunk really fast. I drank two pitchers in two hours, which isn’t Olympian, but made me drunk. Here is a picture of us somewhere after we got lost on the subways home. 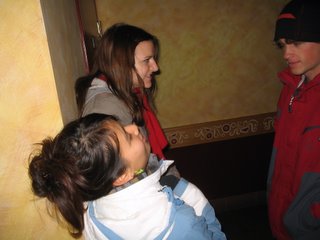 The next day was mostly a wasted recovery day. We had breakfast at McDonald’s, which was expectedly unsatisfying except for the ice cream. 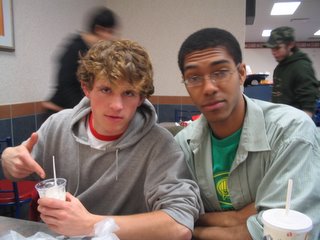 And that’s pretty much it. Here’s a video of me trying to feed Dave ice cream like an airplane. Kate accidentally took this because she doesn’t know how to use Dave’s camera.

So that’s Toronto. I feel like such a small town person whenever I visit there. Like you know how you can hold the entire map of a city like Kingston inside your head, yet in Toronto that’s impossible. Frustrating. Also, the whole improv and artistic community is overwhelmingly large. Dammit, when do I get to grow up?